Action and Development for Africa (AADFA) is a charitable organisation that conducts its activities in The East of Democratic Republic of Congo’s (DRC), Northern province of Kivu-Goma (Goma is a city in the eastern Democratic Republic of the Congo). It is located on the northern shore of Lake Kivu, next to the Rwandan city of Gisenyi).

The Democratic Republic of the Congo, also known as DR Congo, DRC, DROC, RDC, Congo-Kinshasa, or simply Congo, is a country located in Central Africa. From 1971 to 1997 it was known as Zaïre. 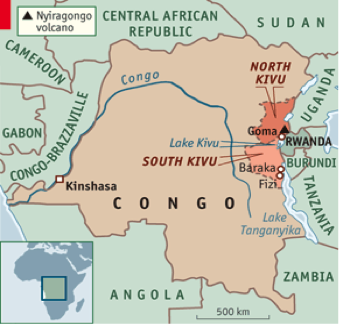 ADFA is an organisation created to deal with the socio-economic problems, including rape and sexual violation, which are often experienced by women in the province of North Kivu (Goma).

We have already completed several actions for vulnerable families in various areas including education for girls, and supporting women with capital to pursue their small businesses.

We currently work in Goma – Northern Province, with our activities in city of Goma in North Kivu province in the Democratic Republic of Congo.

The mission of ADFA is to help vulnerable families. Survivors of rape and sexual assault in particular are a focus, as we assist girls and enable them to integrate more readily into Congolese society.

This is through education, improvements in health and housing, food self- sufficiency and environmental protection of natural resources.

Our main objectives are to:

Action and Development for Africa